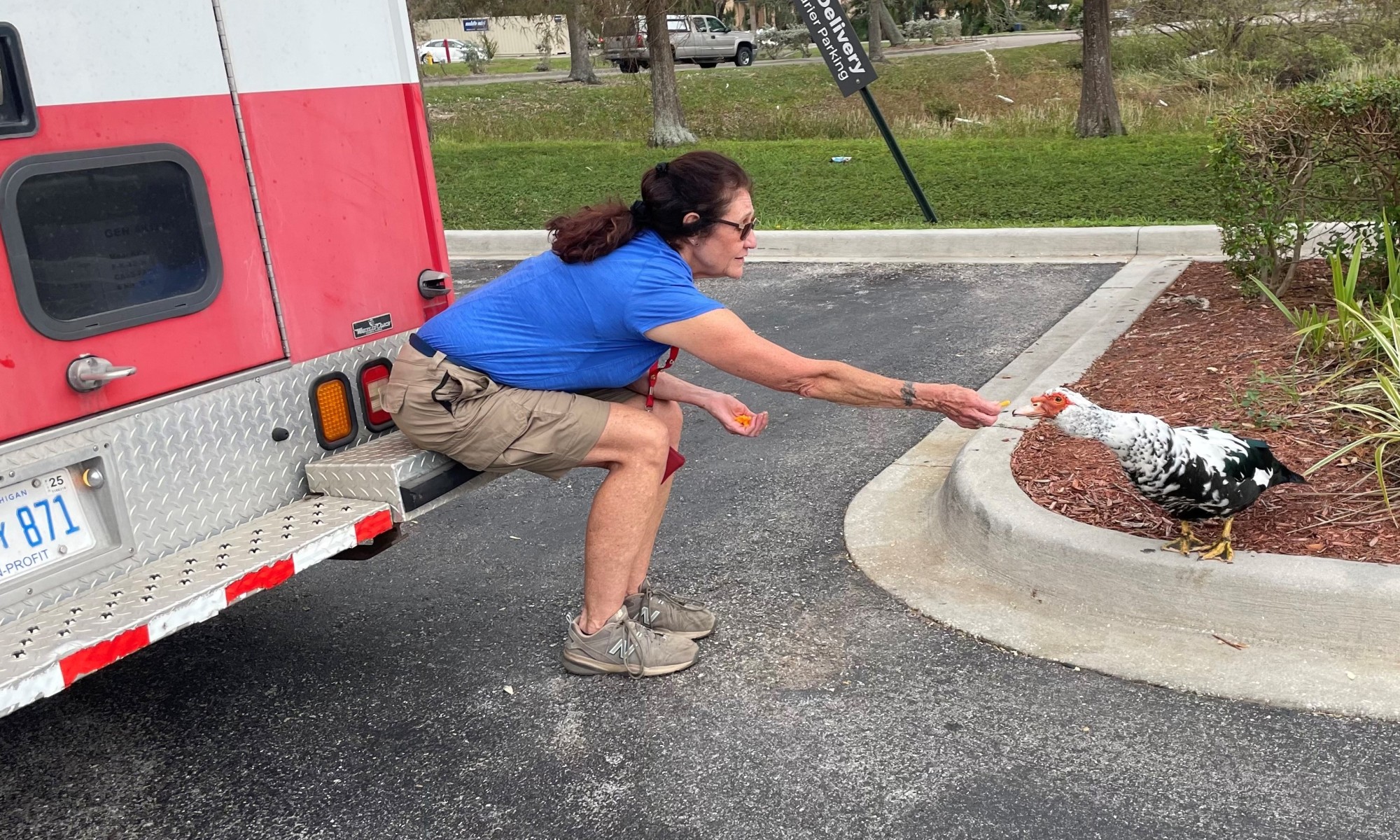 Pamela recently returned from a two-week deployment to the American Red Cross relief and response efforts in Florida in the aftermath of Hurricane Ian. She served meals and water to people impacted by the storm from a Red Cross Emergency Response Vehicle, one of five ERVs deployed from Michigan to Florida to help deliver essential services. Pamela is a volunteer in the Northern Chapter of the American Red Cross Michigan Region.

This was my fifth deployment since becoming a volunteer for the American Red Cross Michigan Region. Hurricane Ian was my third hurricane deployment after Hurricane Michael in 2018 and Hurricane Irma in 2017.

We arrived in Orlando on a Saturday and had the ERV inspected by the Red Cross. The vehicle inspection is required before the ERV can be put into service for health and safety reasons. The next day we were on the road to Fort Myers, after picking up hot meals to serve to people in need. One woman came up to our serving window and said she hadn’t eaten in days. She looked up and started praying giving thanks.

We saw very long lines at gas stations. Their bathrooms were closed for use. Didn’t sleep much at the shelter we stayed at – lots of loud snoring and noisy doors opening and closing. We finally got our first shower – in three days!  Shelters are a staple at disaster sites like this one. They provide food and shelter for people who don’t have homes to return to or a place to go. Some neighborhoods didn’t just have flooding; the sewer system overflowed. Just awful.

We delivered something like 200-400 hot meals a day to people in need. They were grateful to see us.  One man told me he had evacuated but the neighbor behind him stayed behind. That neighbor didn’t survive, unfortunately. A couple came up to our truck covered from head to toe in muck, trying to sift through their soaked belongings. The woman was in tears not knowing where she would go and how they would start over. She said the water in their home came up to her chest. We heard so many stories like this. So many people distraught. I handed a meal to one family and watched the expression of one of the family members as he smelled the food. Like it was the best smell in the world.

A young man approached our truck on bicycle crying. He didn’t know what to do or where to go. I told him to call 1-800-Red Cross. But he was so upset he just took off. It was heartbreaking.

Then there’s my duck story. We were on the way back to our shelter when we stopped at a fast-food restaurant. My Red Cross volunteer partner was craving a fountain drink. While she went inside, I took a seat on the bumper on the back of the truck. That’s when I saw a duck nearby and it appeared to be limping. Poor thing, it was so cute. I didn’t know what to do so I tried to get its attention. I wondered if it might take food from my hand. I found some Cheetos in the truck, so I stretched out my arm and offered one. Without hesitation, the duck took it right from my hand. When it wagged its tail, I gave him another.

All in all, an exhausting deployment but a rewarding one just as well. This is what we do at the Red Cross. Each deployment I’ve been on has been a little different. But the mission is always the same: To alleviate human suffering and be there for those impacted by these devastating events, providing food, shelter, and a shoulder to lean on so that no one faces this tough time alone.

Volunteer with the Red Cross of Michigan today – find out more at redcross.org/michigan today.

The American Red Cross prevents and alleviates human suffering in the face of emergencies by mobilizing the power of volunteers and the generosity of donors.​